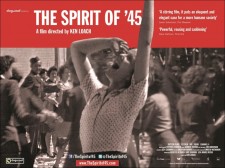 Spirit of ’45 is an impassioned documentary about how the sense of unity which buoyed Britain during the war years carried through to create a vision of a fairer, united society. “The achievements of the ’45 Labour government have largely been written out of our history” says Director Ken Loach, “from near economic collapse we took leading industries into public ownership and established the Welfare State.  Generosity, mutual support and co-operation were the watch-words of the age.  It is time to remember the determination of those who were intent on building a better world”. The film borrows from Britain’s regional and national archives, and adds sound recordings and contemporary interviews to create a rich political and social narrative.

The film seems of enormous relevance to the Transition movement as we endeavour to rebuild community spirit in the face of the challenges of climate change and energy volatility. As usual, it will be shown at St Mary’s Church, St Mary’s Road, Ealing W5 5RH. Entry is free however we will ask for donations to help us cover the cost of screening. A selection of warm beverages and cakes / biscuits will be served after the film so we can discuss what we have seen and its implications for our efforts in Ealing.

If you miss this one, our next film showing will be on 14th July – film title TBC shortly.