Ealing Transition have been working with Ealing Council and the Schools’ Energy Co-operative since 2016 to place solar panels on local schools. These provide about a third of the school’s overall electricity, reduce the schools’ electricity bills, and their carbon footprint. More importantly, we are demonstrating that a decentralised, fossil-fuel free energy system is possible.

Ealing Transition members have provided the funds for the panels, and at the time of writing are getting a 4.5% return on their investment. Ealing schools are pooled with other schools around the country, then funds are raised through share issues by our partner, The Schools’ Energy Cooperative. The latest (Q4/2019) share issue raised almost £700,000. You can find out more at https://schools-energy-coop.co.uk/

Our first two installations, at Castlebar School and Grange Primary School, were completed in August and September 2016. By December 2019, a total of 12 schools and 2 children’s centres in Ealing had benefited from the programme. These sites support a total solar PV generating capacity of 389 kWp. 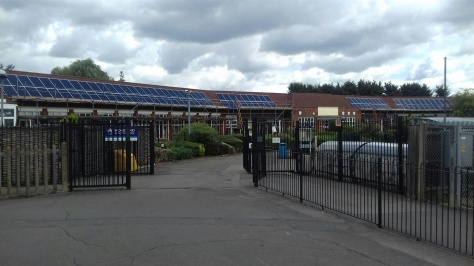 Up to the end of September 2020, the systems had generated almost 676,000 kilowatt-hours (kWh) of electricity, saving an estimated 236 tonnes of carbon dioxide emissions (compared to generation from gas). The generation to date is seven percent higher than initially forecast.

The total annual generation is equivalent to the annual electricity consumption of 120 typical UK homes, saving 122 tonnes of carbon dioxide emissions each year. We anticipate that the systems will have an installed life of up to 35 years, leading to a potential lifetime carbon dioxide saving of more than 4,000 tonnes.

We further estimate that the 14 schools and children’s centres together will now be saving a total of nearly £12,500  annually on their electricity bills.

All our Ealing sites except for the first two were supported by grants from the Greater London Council, under the London Community Energy Fund (LCEF). This provides grants of up to £15,000 towards the development stages of a wide range of community energy projects, including both clean generation and energy demand reduction. Jointly with The Schools’ Energy Cooperative,  we successfully applied fo 5 grants across the three rounds of LCEF funding, much of which supported sites in Ealing. This helped to fund the feasibility studies for the 14 sites that were able to go ahead, and also the “sunk cost” of feasibility studies on 14 further sites that could not proceed for various reasons.

Grant and Andy were invited to meet Shirley Rodrigues, Deputy Mayor of London and Councillor Julian Bell, head of Ealing Council to showcase two of our solar schools, Mandeville School and Horsenden Primary School. In summer 2019, Council leader Julian Bell again supported us at the opening of the solar panel installation at Perivale Primary School, the 50th system installed by the Schools’ Energy Cooperative, and our 10th in Ealing. You can read more about this here.

Although the “feed in tariff” government subsidy  (which part-funds these installations) has now closed, we still hope to be able to install further sites in Ealing – watch this space for updates!