After a short summer break, Ealing Transition re-convened on Saturday 22nd September for our second re-skilling day, back by popular demand after a very enjoyable event at the same time last year. (Previous participants learned a variety of skills from bread and jam making to home energy conservation, make do and mend, bee keeping and hands-on health).

This year urban animal husbandry was high on the agenda. During 2012 a Transition group set up a hive on CSA (community supported agriculture) lines, selling ‘Beeshares’ at £10 each to fund it. Despite the challenging weather conditions throughout the year, the bees managed to produce a dividend of 1lb of honey for all of the 30+ members who supported the initiative. Several talks were given about beekeeping and there was also a visit to the hive. Steering group member Steve and his family branched out earlier this year into both chicken and pig keeping, so there was an opportunity to spend some quality time with a pair of Gloucester Old Spots, and to talk about the practicalities of rearing larger animals in the urban environment.

Last year a team led by Ellis built a clay pizza oven in the two weeks prior to the event, and cooked pizza in it during the day. Although everyone had lots to ask about the oven, and the kids had fun firing it, we thought that this year it would be nice to demonstrate some natural building techniques as well. So, with the help of a “16 brick rocket stove” video from YouTube, Ellis pre-made some adobe bricks using clay, sand and straw, but also brought the raw ingredients to demonstrate how the bricks were made.

A number of people had a go at making bricks during the afternoon, also exploring the difference the straw makes in holding the bricks together. A small tower of (by now quite solid) bricks was built, then willing helpers gathered firewood and stoked the fire. Pleasingly, it burned quite fiercely and with little smoke. Then, all that remained was to pan-fry a family recipe – a fritter known as a bhaja (pronounced ‘badger’ – see our website for the recipe). The exercise gave Ellis a great opportunity to talk to people about the advantages of natural building materials, and the children who joined in had a lot of fun making and playing with bricks (and only got slightly muddy and smoky!)

Elsewhere, our friends from the Ealing Cycle Hub were kept busy all afternoon in a very popular bike maintenance workshop. Few people needed much encouragement to join the cider making class, which was also held outdoors to make the most of the sunshine.

Indoors, a group of eight made bread around a large communal table. This was great fun, with a wide spread of ages and cooking abilities, and the more experienced cooks helping out the younger ones. After the messy bit was done, the breadmakers returned periodically for shaping and cooking, and all walked away about 5.30pm with an actual risen, cooked loaf. Considering the number of things that can go wrong when you make bread, particularly when you are making it in a draughty church hall rather than a nice warm kitchen, this was a great result!

There were more food-themed classes in chutney making and preserving & fermenting vegetables, and for the more practically-minded there was knitting, sewing and upcycling clothes. Local energy expert Donald gave a talk on how electricity is made, and later in the afternoon local growers were on hand for a version of Gardener’s Question Time.

There were also activities which ran throughout the day, including freecycling books and clothes, a bookshop and library, displays, and the children’s play area.

By the end of the afternoon over 100 people had taken part in various activities, and settled down to enjoy a communal meal made from locally sourced ingredients. 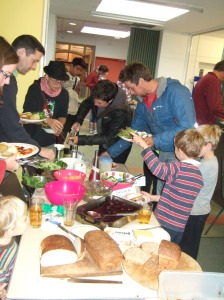 Writing this two days after the event we are still finalizing the numbers, but the scores on the doors look like this:

Costs: definitely broke even and may even have sneaked into the black on donations

If you have a skill you would like to learn or share, please contact us and we will do our best to include it in reskilling 2013!